This chapter deals with basic procedures for preparing and transmitting ice charts. Ice charts are of importance to icebreaker captains, commercial shipping interests and fishing vessels to assist them in finding the easiest passage through the ice or to avoid the ice when feasible to do so. The data on the chart is of vital importance to ice forecasters, serving as the basis for:

Time and care are necessary to prepare ice charts. Details and precision are of the utmost importance.

Ice charts are drawn directly on a computer screen using Geographical Information Systems software. This software has been developed specifically for the Coast Guard to allow precise observation and quick transmission of data.

It is beyond the scope of this manual to describe this particular software in detail. It is sufficient to know the precision of observation is greatly increased by the use and integration of the Global Positioning System (GPS). The usefulness of the data is enhanced by the automatic verification of all coding and final preparation of charts.

Data (in the form of electronic files or charts) is of special importance to the ice forecasters and analysts and ships operating in or near the areas observed during the reconnaissance mission. Files are updated continuously while airborne and sent frequently. Partial files, rough copies and final copies of charts may be sent in-flight to the Canadian Ice Service, the appropriate Coast Guard ice offices and Coast Guard ships as necessary.

After the termination of the reconnaissance mission, the Ice Service Specialist will transmit the completed and corrected data to the Canadian Ice Service for distribution.

An Ice Service Specialist serving on icebreakers equipped with appropriate communication equipment should relay their ice information (even if incomplete) before 1800 UTC to Canadian Ice Service. Upon completion of the duty day, a second transmission is recommended. The data should be sent in the form of an electronic file via cellular phone, landline or satellite link depending on what is practical and available.

If it is not possible to transmit an electronic file, then a map could be printed and send by facsimile.

The basic data concerning concentrations, stages of development (age) and form (floe size) of ice are contained in a simple oval form. A maximum of three ice types is described within the oval. This oval and the coding associated with it, are referred to as the “Egg Code”. To indicate ice observations interpreted from radar imagery, the oval shall be omitted.

In the following figures and tables where ranges are shown for thickness, floe sizes or other dimensions, a report coinciding with the end point of a range shall be coded as the higher value.

The following is a summary diagram of the Egg Code. This code conforms to international convention and shall be used in coding all visual sea ice and lake ice observations without exception.

There are some minor additions to the egg code symbology that are Canadian practice. In Canada, to enable the reporting of additional ice classes, especially during freeze-up and break-up, Cd Se and Fe can be used. This should not be a common occurrence.

The following pages describe the specific details and rules for completing each level of information within the egg.

Stage of development of thickest (So), second thickest (Sa), third thickest (Sb) and fourth thickest (Sc) ice and the thinner ice types Sd and Se, of which the concentrations are reported by CaCb Cc Cdrespectively.

Floe Size corresponding to SaSbSc Sd and Se (when Sdand Seare greater than a trace).

3.4.4 Coding and Symbology for Strips and Patches

The symbol, placed at the bottom of the oval in the section reserved for Form of Ice, indicates that the ice is in strips and patches; the concentration within the strips and patches is represented by C.(see Example 11, section 3.8).

In an area where the ice is arranged in strips and patches and the ice floes are medium or greater, the floe size shall be indicated by using two ovals. The floe sizes are indicated as normal in the first oval, with the symbol placed between the first and second ovals. The symbol is repeated in the second oval beside the total concentration of the strips and patches (see Example 12a, section 3.8).

An alternate way of reporting the same situation as above:

If 1 tenth or more of brash is present, it will always be Ca .

If brash is present, Sa will always be a dash (-), otherwise the normal table is to be used.

Brash is already indicated in the table as 1, therefore Fa= 1 confirms the dash (-) for Sa.

Four digits (VKMT) shall be added below the oval to indicate the thickness concentration breakdown of the brash that is present. Table 3.4 (below) shows the thickness Categories for agglomerated brash. The breakdown shall be entered going from right (T) to left (V). In the case where there is no thickness for thin but there are entries for medium, thick and very thick a zero (0) shall be placed in the thin column. This also holds true for medium (M) and thick (K) regardless of the combination (see Example 14, to Example 17, section 3.8).

3.5.2 Symbols for Openings in the Ice

Symbols for Openings in the Ice

When more than one measurement has been taken, both mean and maximum thicknesses are reported, as shown below:

3.5.6 Coding and Symbology for Snow Cover

Coding and Symbology for Snow Cover

3.5.7 Coding and Symbology for Ice of Land Origin

Tabular iceberg indicated by adding a horizontal line through any of the symbols as shown in the following example. These symbols can be combined with a number, if exact numbers are known.

Areas showing no radar return shall be indicated NIL ECHO.

In order to facilitate readability of the chart, ice-covered areas may be hatched according to total ice concentration. The hatching symbology (developed by World Meteorological Organization) may be applied to all areas of ice concentration or only to some of them. Whenever hatching is applied, the hatching symbols as shown in Table 3.9 shall be used. No International Rules are given for the thickness of the hatching lines; the thickness may be the same throughout all hatched areas or may vary in the sense that the thickest lines are used for areas of thicker ice. It is Canadian practice not to hatch ice charts except for total concentrations less than 1/10th.

Table 3.9: World Meteorological Organization Symbols For the Hatching of Total Concentration of Ice

Presence of new ice can be indicated by the following symbols scattered throughout area affected:

For several years, the Ice Service Specialists have been applying a colour code to ice information charts for the Canadian Coast Guard operations in the St. Lawrence River and the Gulf of St. Lawrence. This has proven to be quite beneficial to individuals making transportation decisions based on these information products. More recently, we have modified and expanded this colour code for application in all coastal waters of Canada, including the Arctic.

This colour code is intended to assist navigation decisions in ice infested water. It is loosely based on the concept of a traffic light where green represents proceed, yellow represents caution and red represents danger. The objective of the colour code application is to enable a person to quickly assess general ice conditions. A ship sailing in a given area can easily assess the general ice conditions and hence qualify the difficulty or ease to either navigate through easily, or to reduce speed or to stop the ship.

However, this does not consider the other variables such as winds, currents or ship design which are important considerations in any ice navigation decision. The most detailed ice information continues to reside in the ice egg codes.

The following text is intended to assist an individual interpret the colour presentation.

Areas of open water or bergy water are coloured blue.

The colour for a given ice area will be determined by the total concentration of the ice types thicker than 15 centimetres and is represented by the following list:

The presence of old ice (multi-year ice) is indicated by the colour purple, and is represented by the following list:

The presence of fast ice, regardless of the thickness is always black or grey.

Ice Types Thinner than 15 centimetres – No Colour Assigned in Background

Ice less than 15 centimetres in thickness is indicated by a star code and the colour of the stars is determined by the predominance between grey ice (10 to 15 centimetres) and new ice (0 to 10 centimetres), and is represented by the following list:

Secondary ice types with less than 15 centimetres in thickness are indicated by a star code and the colour of the stars is determined by the predominance between secondary grey ice (10 to 15 centimetres) and secondary new ice (0 to 10 centimetres), and is represented by the following list:

The star code is placed over top of the background colour. In the case of 9 to 10 tenths of ice (red background) and predominance of ice thickness between 10 and 15 centimetres (red stars), there is only one colour which can be represented: red. The result of red stars on a red background is red.

3.8 Examples of the Use of the Egg Code

Less than one tenth of ice to show open water. Some thick first-year in small floes; new ice is also present and has no floe form.

4/10 of old ice in medium floes. New ice is also present with a concentration of less than 1/10. 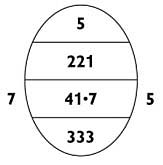 9+/10 total ice concentration. 3/10 old ice in big floes, 4/10 first-year ice in medium floes and 3/10 young ice with floes undetermined. Horizontal lines with no egg shell indicates that data has been interpreted from radar 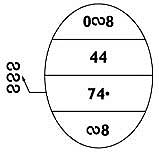 Open water with strips and patches of old and thick first-year ice in small floes. 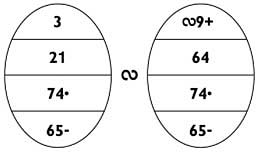 3/10 total ice concentration in strips and patches of 9+/10. 6/10 old ice in vast floes and 4/10 thick first-year ice in big floes. These floe sizes are significant and warrant the use of two ovals.

An alternate way to describe the same conditions with 3/10 total ice concentration in strips and patches of 9+/10. 6/10 old ice in vast floes and 4/10 thick first-year ice in big floes. These floe sizes are indicated because they are significant.

The above information is © Government of Canada and the original can be viewed at Manual of Ice (MANICE) – Canada.ca