These transits proceed to or from the Atlantic Ocean (Labrador Sea) in or out of the eastern approaches to the Canadian Arctic archipelago (Lancaster Sound or Foxe Basin) then the western approaches (McClure Strait or Amundsen Gulf), across the Beaufort Sea and Chukchi Sea of the Arctic Ocean, through the Bering Strait, from or to the Bering Sea of the Pacific Ocean.

The Arctic Circle is crossed near the beginning and the end of all transits except those to or from the central or northern coast of west Greenland.  The routes and directions are indicated.

Details of submarine transits are not included because only two have been reported (1960 USS Sea Dragon, Capt. George Peabody Steele, westbound on route 1 and 1962 USS Skate, Capt. Joseph Lawrence Skoog, eastbound on route 1).

Seven routes have been used for transits of the Northwest Passage with some minor variations (for example through Pond Inlet and Navy Board Inlet) and two composite courses in summers when ice was minimal (transits 149 and 166). These are shown on the map following, and proceed westbound as follows:

These routes are shown on the map below: 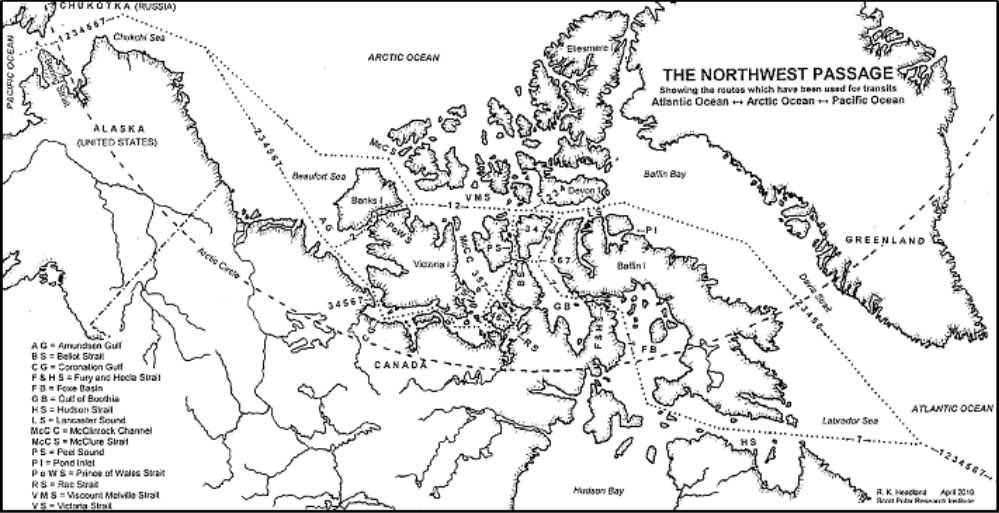 Complete transits have been made by 262 different vessels.

The Russian icebreaker Kapitan Khlebnikov has made 18 tran­sits, the largest number of any vessel. Hanseatic has made 11, Bremen 10 (2 with the former name, Frontier Spirit), Polar Bound 7; 2 vessels have made 4 transits, 4 vessels have each made 3 transits, and 33 have made 2 transits.

More than one year was taken by 32 of these vessels, mainly small craft, to complete a transit wintering at various places along the route (complements of some of these vessels left for winter returning in a later navigation season).  Return transits in one summer have been made by 7 vessels.

Specific passengers vessels have made 72 transits, but only 30 transits were transporting commercial cargo.  Others were for repositioning and supply, or other work, in the Arctic.

David Scott Cowper and Viktor Vasiliev have commanded 8 transits, Heinz Aye and Piotr Golikov 6, and Thilo Natke 5; 28 others have commanded more than one.

An analysis of the transit routes used through the Northwest Passage to the end of navigation in 2022 shows:

The list is in alphabetical order of Vessel Names in the years of completion of the transits (the transit numbers do not indicate precedence). Numbers (in brackets) are the cumulative number of transits, masters, flags etc.

Several vessels, including recent small craft, have traversed the Canadian Arctic archipelago, Beaufort Sea and Chukchi Sea to or from Russian waters. Those which neither transited Bering Strait nor entered the Pacific Ocean are not included in this list, although some circumnavigated the Arctic Ocean.

Many other voyages have been made through the archipelago of the Canadian Arctic, notably the return voyage of the experimental oil tanker Manhattan with escort vessels which reached Barrow, on the Arctic coast of Alaska, in 1969 from the Atlantic Ocean, but did not continue to the Pacific Ocean before making an eastbound return voyage.

Similarly constraints are applied to voyages which ended in Pond Inlet, the region of the Mackenzie Delta, or comparable locations, where a vessel was towed while unoccupied, or carried partly as deck cargo (including Baymaud, 1926-2017). These can not regarded as complete transits of the Northwest Passage; incomplete transits have become too numerous to record.

Nationalities: principles adopted for these are the approved English short forms applied by several international organizations and published by The Times Atlas.